On 28 September 2021, the Jury of the competition for the curatorial project of the exhibition in the Polish Pavilion at the 59th International Art Exhibition in Venice in 2022 convened in a session at Zachęta — National Gallery of Art. The Jury appointed by Professor Piotr Gliński, Minister of Culture, National Heritage and Sport of the Republic of Poland, including: Mateusz Adamkowski, Maciej Aleksandrowicz, Piotr Bernatowicz, Jacek Friedrich, Alicja Knast, Agnieszka Komar-Morawska, Joanna Mytkowska, Joanna Malinowska, Barbara Schabowska, Sylwia Świsłocka-Karwot, Andrzej Szczerski, Jarosław Suchan,Tomasz Wendland, Hanna Wróblewska (President of the Jury), Karolina Ziębińska-Lewandowska – issued the following statement:

Having reviewed the submitted projects and after a long and in-depth discussion, the jury selected in an open two-stage vote the project by Małgorzata Mirga-Tas’s “Re-enchanting the World”, proposed by curators Wojciech Szymański and Joanna Warsza (emblem Bacht) to be carried out. The Jury noted the project’s unusually attractive visual form (opening the pavilion to a wider audience) combined with an original and deliberate ideological concept ‘proposing a new narrative about the constant migration of images and mutual influences between Roma, Polish and European cultures’. The project intertwines in a creative way the artist’s personal experience and local stories with, among others, the tradition of Renaissance wall painting, at the same time combining private iconography with symbolism and allegory from centuries ago.

Teresa Murak’s project ‘Velma’, curated by Łukasz Ronduda and Łukasz Mojsak and submitted under the emblem TM, was selected as the reserve project. 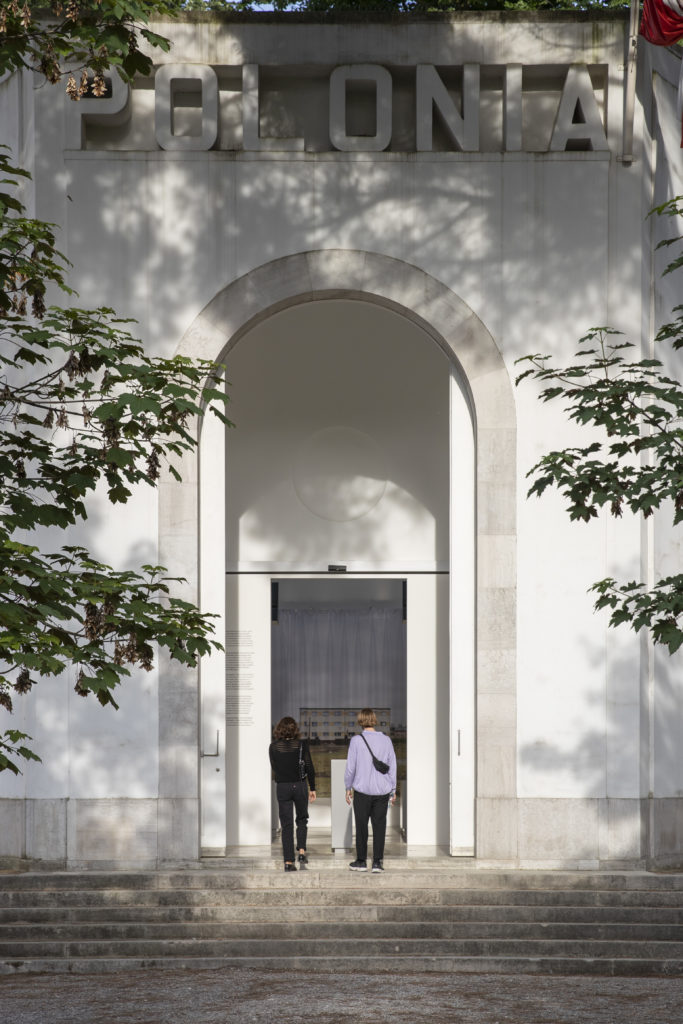 The Milk of Dreams

The exhibition takes its name from a book by Surrealist artist Leonora Carrington (1917-2011). In the 1950s, while living in Mexico, Carrington dreamed up and illustrated mysterious tales, first directly on the walls of her home, then in a small notebook with this title. The mind-bending visions of hybrid, mutant creatures that fill her fanciful universes include children who lose their heads, vultures trapped in gelatin, and carnivorous machines. Told in a dreamlike style that seemed to terrify young and old alike, Carrington’s stories describe a magical world where life is constantly re-envisioned through the prism of the imagination, and where everyone can change, be transformed, become something or someone else. It is a world set free, brimming with possibilities. But it is also the allegory of a century that imposed intolerable pressure on the individual, forcing Carrington into a life of exile: locked up in mental hospitals, an eternal object of fascination and desire, yet also a figure of startling power and mystery, always fleeing the strictures of a fixed, coherent identity. When asked about her birth, Carrington would say she was the product of her mother’s encounter with a machine, in the same bizarre union of human, animal, and mechanical that marks much of her painting and writing.

The exhibition The Milk of Dreams takes Leonora Carrington, her otherworldly creatures, and many other figures of transformation as companions on an imaginary journey through metamorphoses of the body and definitions of humanity. This exhibition is grounded in many conversations with artists which took place over the past months. The questions that kept emerging seem to capture this moment in history when the very survival of the species is threatened, but also to sum up doubts that pervade the sciences, arts, and myths of our time. How is the definition of the human changing? What constitutes life, and what differentiates animals, plants, humans and non-humans? What are our responsibilities towards the planet, other people, and the different organisms we live with? And what would life look like without us?

These are some of the guiding questions for this edition of the Biennale Arte, which focuses on three themes in particular: the representation of bodies and their metamorphoses; the relationship between individuals and technologies; the connection between bodies and the earth.

Many contemporary artists are imagining a posthuman condition that challenges the modern Western vision of the human being—and especially the presumed universal ideal of the white, male “Man of reason”—as fixed center of the universe and measure of all things. In its place, artists propose new alliances between species, and worlds inhabited by porous, hybrid, manifold beings that are not unlike Carrington’s extraordinary creatures.

Under the increasingly invasive pressure of technology, the boundaries between bodies and objects have been utterly transformed, bringing about profound mutations that remap subjectivities, hierarchies, and anatomies.

Today, the world seems dramatically split between technological optimism, which promises that the human body can be endlessly perfected through science, and the dread of a complete takeover by machines via automation and artificial intelligence. This rift has been exacerbated by the COVID-19 pandemic, which has caged much of human interaction behind the screens of electronic devices and forced us even further apart. In these many months, the human body’s fragility has become tragically apparent, but at the same time has been kept at a distance, filtered through technology, rendered almost intangible and disincarnate.

The pressure of technology, the outbreak of the pandemic, the heightening of social tensions, and the looming threat of environmental disaster remind us every day that as mortal bodies, we are neither invincible nor self-sufficient, but rather part of a symbiotic web of interdependencies that bind us to each other, to other species, and to the planet as a whole.

Many artists envision the end of anthropocentrism, celebrating a new communion with the non-human, with the animal world, and with the Earth; they are also developing a sense of kinship between species and between the organic and inorganic, animate and inanimate. Others react to the dissolution of supposedly universal systems, rediscovering localized forms of knowledge and new politics of identity. Still others practice what feminist theorist and activist Silvia Federici calls the “re-enchantment of the world”, mingling indigenous traditions with personal mythologies in much the same way as Leonora Carrington.

Though the events of recent months have yielded a torn, riven world, the exhibition The Milk of Dreams tries to imagine other modes of coexistence and transformation. So despite the climate that forged it, it aspires to be an optimistic exhibition, which celebrates art and its capacity to create alternative cosmologies and new conditions of existence. It asks artists not to reveal who we are, but to absorb the worries and fears of this time and show us who and what we can become.