Sharon Lockhart (b. 1964) is an American artist living and working in Los Angeles and Poland. Lockhart works with communities to make films and photographs that are both visually compelling and socially engaged through collaborations that unfold over long periods of time. Created with young women from the Youth Sociotherapy Center in Rudzienko, Poland, her project Little Review comprises translations, a new film and series of photographs, as well as educational workshops. Little Review draws its inspiration from the work of Janusz Korczak (1878-1942), the Polish-Jewish educator, orphanage-director, and children’s rights advocate. Similar to Korczak, Lockhart’s goal is to provide a forum for children’s voices — both past and present.

The eponymous Little Review (Mały Przegląd) was a newspaper written by children and teenagers and published as a weekly supplement to the Jewish daily Our Review (Nasz Przegląd) from 1926 to 1939. Created and originally edited by Korczak, the Little Review gave voice to young people’s opinions on politics and everyday life.

The new photographs in the exhibition — introspective and careful studies — portray two young women from Rudzienko reading the Little Review in the National Library in Warsaw, where the newspaper has been conserved. Framing an encounter across nearly a hundred years of history, the photographs reflect on the gaps, linkages, and subtexts between past and present.

From the archive of 677 issues, the young women chose twenty-nine issues of the Little Review based in part on connections with their own lives and parallels to today’s uncertain times. Their selections from the paper, which remains untranslated and largely unknown, are presented here for the first time in English on a weekly basis for the duration of the Biennale.

Accompanying the texts, a new film by Lockhart suggests a more abstract translation of the Little Review: three acts and a satirical prologue performed by the young women that evoke the resilient and candid spirit of Korczak’s newspaper. Set against a black background that refuses a single context, the scenes are resonant of the history of a diverse group of practices in both the visual and performing arts. Given this space to be seen and heard, the young women, like Korczak’s writers, command performances full of nuance and self-possession.

Since 2014, Lockhart has been conducting workshops with the young women of Rudzienko.

Throughout the Biennale, Lockhart and the Zachęta – National Gallery of Art in Warsaw will continue to organize educational workshops for the young women aimed at empowering their sense of agency, freedom, creativity and modeling possibilities for longer-term support structures with Warsaw institutions.

At the heart of this multilayered project are the subtle and myriad ways in which individual lives and their sociopolitical realities are brought together through an intermingling of past and present. The installation furnished with architectural elements adapted from the National Library in Warsaw, gives palpable form to this density of histories and lives. A collective portrait that focuses, in the here and now, a nearly hundred-year-old call for an empathetic community that cares for every voice.

Every Friday a new translation of the “Little Review” newspaper selected by the girls from Rudzienko is made available in the pavilion and online (29 issues in total). 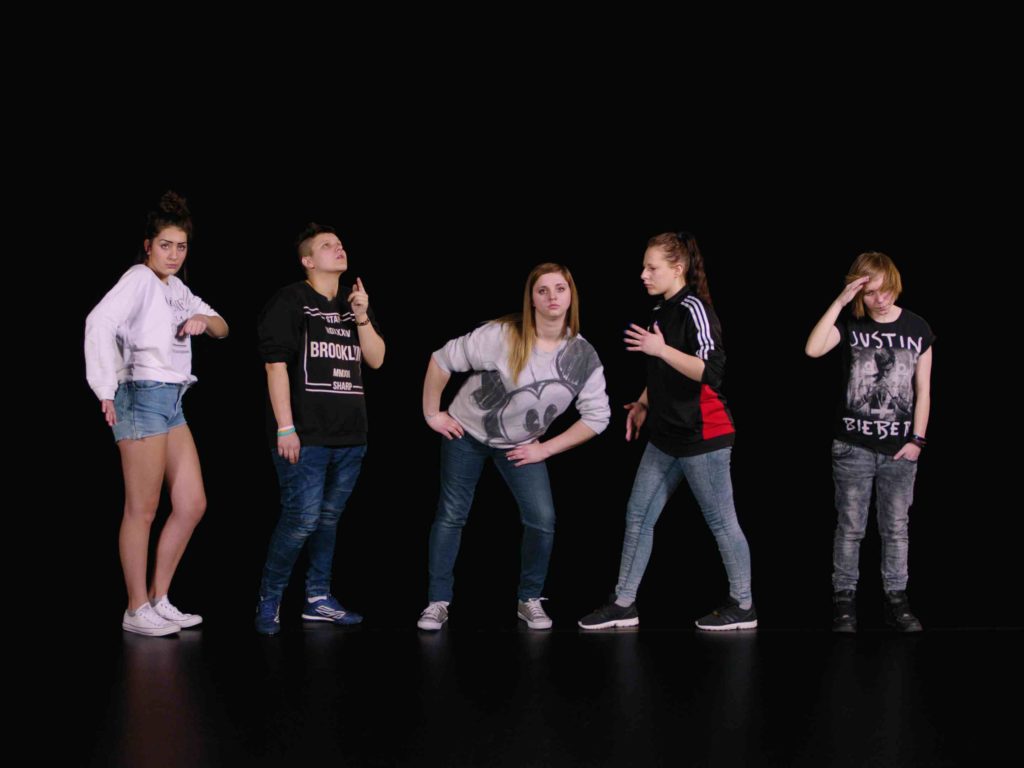 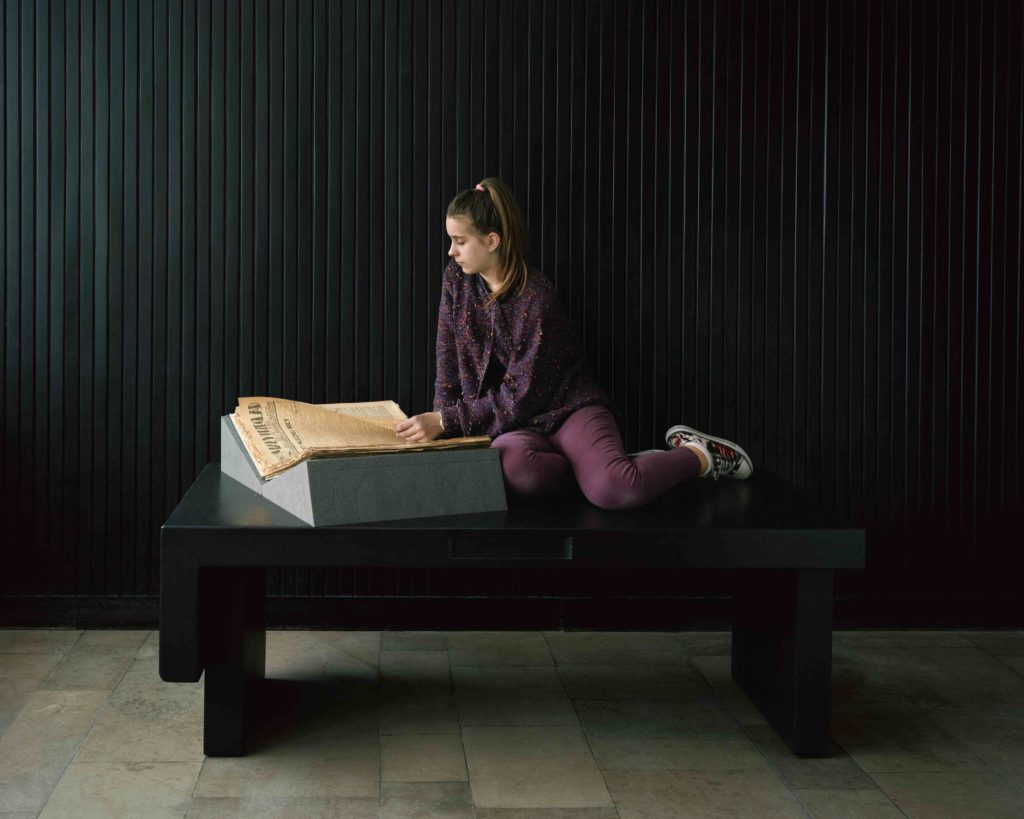 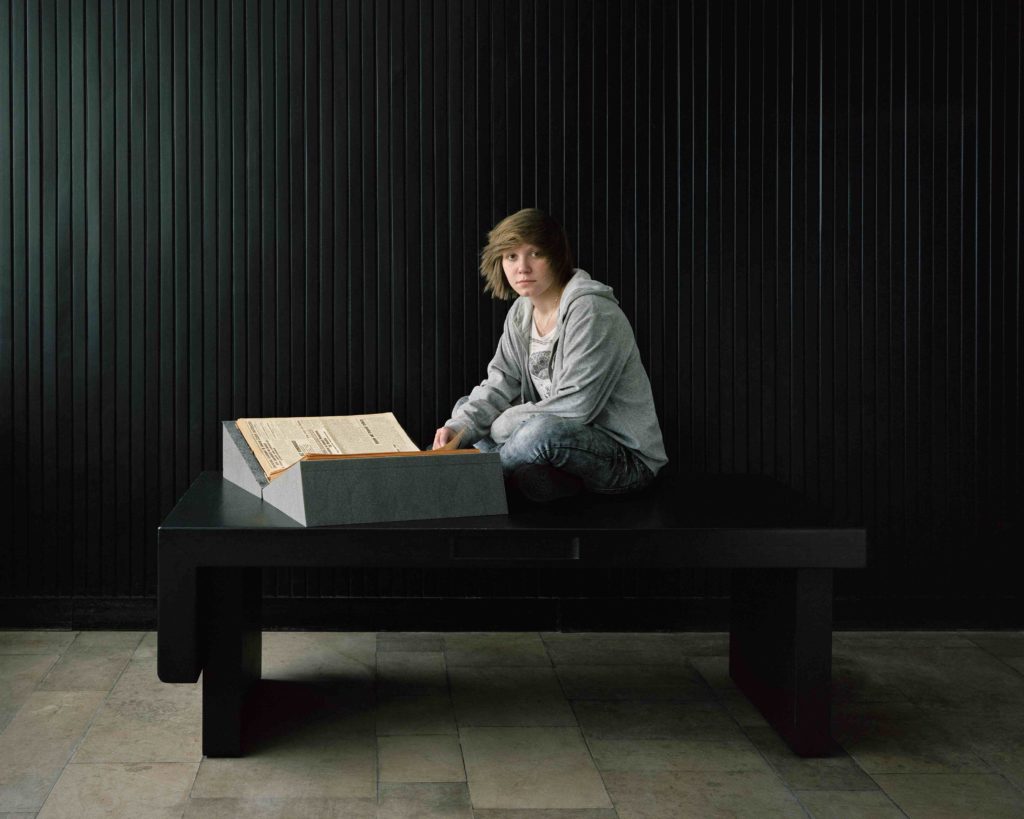 Sharon Lockhart (born 1964 in Norwood, USA) — Los Angeles-based artist, creates photographs and films born from the processes of in-depth research and long-term collaboration with various communities. These include: Goshogaoka (1997) created in Japan, Teatro Amazonas (2000) in Brazil, Pine Flat  (2006) and Lunch Break (2008) in the USA, as well as Podwórka (Courtyards) (2009) and Rudzienko (2016) in Poland. Lockhart’s works have been presented in numerous institutions worldwide, including the Museum of Modern Art (MoMA) in New York, Sala Rekalde in Bilbao, Los Angeles County Museum of Art (LACMA), the Israel Museum in Jerusalem, Solomon R. Guggenheim Museum in New York, Secession in Vienna, Centre for Contemporary Art Ujazdowski Castle in Warsaw, Kunstmuseum Luzern in Lucerne, Bonniers Konsthall in Stockholm, as well as during the Four Cultures Festival in Łódź, Sundance Film Festival, the Berlin International Film Festival, the Whitney Biennale in New York, the Shanghai and Liverpool Biennials. Lockhart’s work is also included in many prominent international collections, such as those of the Tate Modern in London and the Metropolitan Museum of Art in New York. The artist has participated in numerous fellowships and residencies, including those from the DAAD programme, the Radcliffe Institute/Harvard University, the John Simon Guggenheim Memorial Foundation, and the Polin Museum in Warsaw. Lockhart was a professor at the University of Southern California Roski School of Art and Design, and currently holds a faculty position at the California Institute for the Arts.

Barbara Piwowarska (born 1976 in Warsaw) — curator and art historian. She specialises in avant-garde art, its reception and reinterpretation, and contemporary art. In 2007 she organised Lockhart’s first presentation in Poland at the Bytom Culture Centre during the residence Live, Survive, and Create! hosted by the Kronika Gallery in Bytom. She was a recipient of the Kościuszko Foundation scholarship at the Museum of Modern Art (MoMA) in New York (2001), and is a member of the International Association of Art Critics AICA. In last decade, she has curated and co-curated a number of projects and exhibitions, including a retrospective of Jadwiga Maziarska The Atlas of the Imaginary (CCA Ujazdowski Castle, Warsaw), Polish New Wave: The History of a Phenomenon that Never Existed (Tate Modern, London,  Anthology Film Archives, New York and MAMC, Strasburg), Film Matters (Beton7, Athens), Die (COCO Kunstverein, Vienna), Footnote 6: As Model (Miguel Abreu Gallery, New York), The Third Room (Kunsthalle Düsseldorf and the Museum of Modern Art in Warsaw), Erna Rosenstein: I Can Repeat Only Unconsciously (Foksal Gallery Foundation and the Institute of Avant-garde, Warsaw), Erna Rosenstein: Organism (Art Stations by Grażyna Kulczyk, Poznań) among others. As of 2016, she has worked as curator at the Studio Gallery (Galeria Studio) in Warsaw.