It has always been a characteristic feature of the creative activity of Magdalena Abakanowicz to go beyond the traditional divisions of art in general. To the colour and workmanship of painting she lends the aggressiveness of the form of sculpture whereas the only materials she uses are weaving and textile fibres. Throughout the whole of her artistic progress, she has always looked with aversion on all modern technology. She tends coherently always to natural simplicity, originality, and organic unity – proper to nature itself, in such a way that her works of art – woven with textile fibres – should be able to proliferate in space, just like nature itself, in an almost biological way.

A distinctive hallmark of her fabrics, which were originally hung on the walls like curtains, and later on were grouped in many-layered spatial structures, has always been a certain monumental quality.

Towards 1970 she also started using thick ropes. This simple compositional element re­quired each time a different point of suspen­sion, which gave to every exhibition of hers an individual touch. Sometimes it was a rope lying coiled on the floor, suggesting infinity in space. Or else hanging freely from the ceiling like a jungle liana, or else placed In the centre of a composition of hers, forming complex interweavings which could bring to mind an en­tangled branch of a tree. This “playing” with rope implies, in fact, constant improvisation, of which the only remaining traces are the photographs. But the artist was only concerned with the creative act – individual and un­repeatable.

The first cycle of “Alternations” (Alternacje), has, as its subtitle, this legend: “images of the human structure.” These imitations, all seated in a row, headless, which are hardly more than wrappings, mere traces of human existence, modelled with heavy fibres and ropes, surprise us by their expressive severity. Their nudity seems to be a natural attribute of primitive peo­ples. The interior of their violently lacerated bodies enables our gaze to go beyond the empty shell.

The following cycle, entitled “Alterations -Shoulders” from the point of view of form is concerned with the same problem of open, lacerated sculpture. But as regards the con­tents, the two cycles are essentially different from one another.

The first cycle is composed of monumental dummy figures, placed frontally in the room, so as to attack the spectator violently. In “Shoulders” instead, we have a cycle of figures facing away from the public. They are a celebration of their own mystery. The spectator cannot but feel himself to be an intruder who is interrupting people meditating, just like a noisy tourist – a disturber of the silence reigning in the stone circles of menhirs. In the cycles “Alterations – heads” and “Embryology,” Magdalena Abakanowicz lays aside the open construction, creating compact pieces of sculpture, which are closed, sewn up with ropes.

In the case of “Embryology,” the spherical ob­jects of various sizes, sackcloth which has been sewn, form a purely casual composition. Hud­dled together in a confused way in an enor­mous heap like large fruits and tiny seeds -germs of future life – primitive organisms which have, as yet, no definite form, but which already possess vital strength and power. They repre­sent, like all the creative activity of Magdalena Abakanowicz, the apotheosis of life, of organic material, in praise of the entire physical and biological quality of nature. 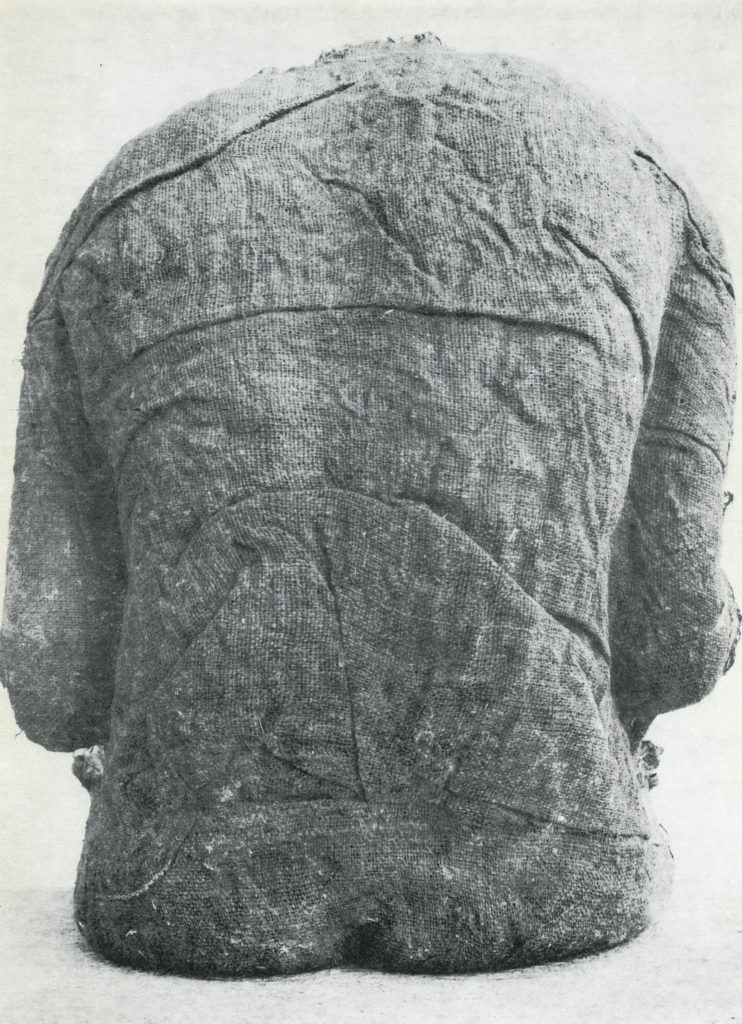 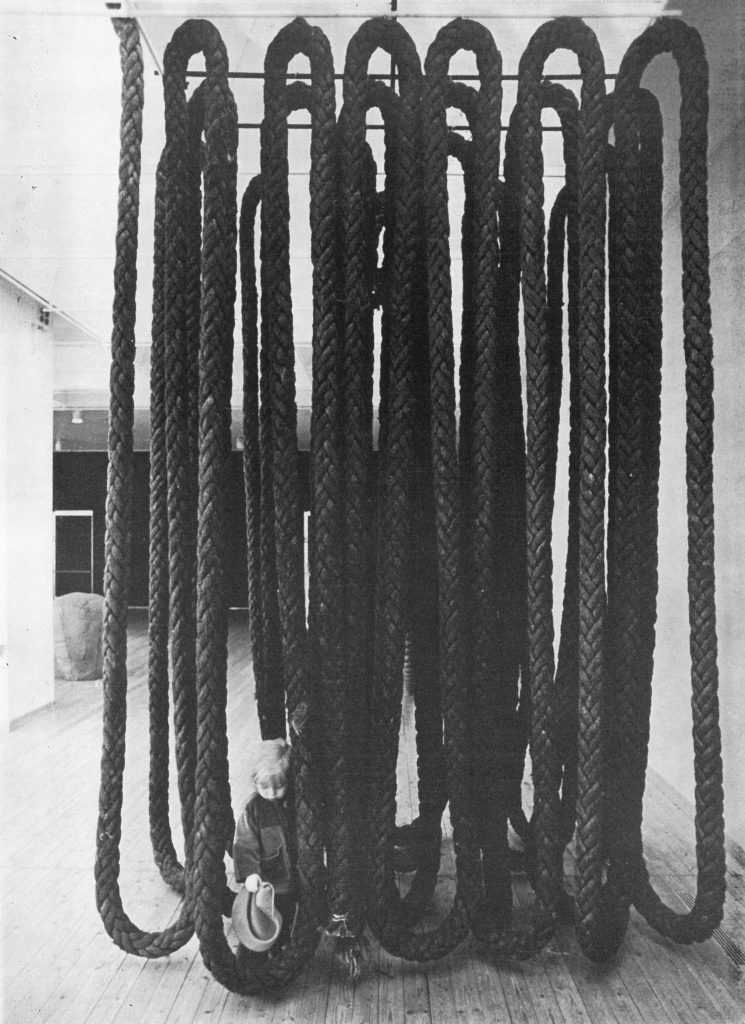 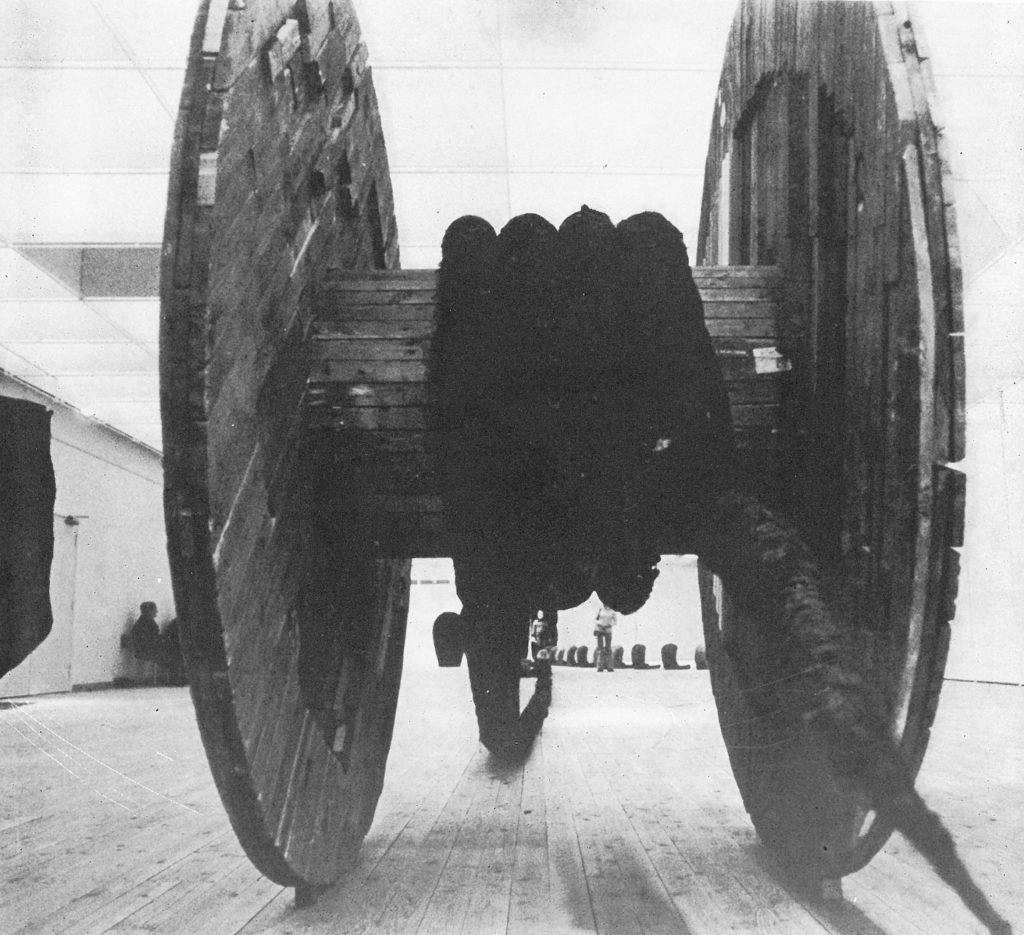